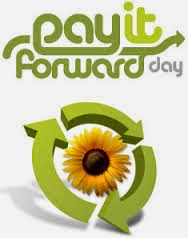 Pay it forward is an expression used when someone who is done a good deed repays it to others not the original benefactor. The concept is old, but the term is quite recent:

I do not pretend to give such a deed; I only lend it to you. When you [...] meet with another honest Man in similar Distress, you must pay me by lending this Sum to him; enjoining him to discharge the Debt by a like operation, when he shall be able, and shall meet with another opportunity. I hope it may thus go thro' many hands, before it meets with a Knave that will stop its Progress. This is a trick of mine for doing a deal of good with a little money.